Rachel Dhonau compiled her extraordinary diary in Sheringham, the Norfolk seaside town and her home for almost all her life. North Norfolk, absorbed in farming and holiday-making in the 1930s became a theatre of war a few years later, and Mrs Dhonau recorded war’s medley of drama and banality with graphic and incisive economy.

In her pages a contrast is implied between the suffering under bombing of Sheringham and Cromer, and the ribald conduct of the garrisons along the coast: between the turmoil as convoys offshore were attacked by German torpedo boats, and the measured bureaucratic procedures (and occasional scandals) in the food office where Rachel worked in 1941: between the serenity of the woods behind Sheringham where Rachel walked her son Timothy, and the noise of bombers flying over Norfolk on their way to devastate the cities of Germany.

Rachel Dhonau, a British citizen born in England, had German antecedents and many friends and relatives in the Rhineland. Their presumed suffering under British bombing caused her much anguish, and in some of her most moving paragraphs she pondered on the moral ambiguities of war. Having started the war as a most patriotic anti-nazis, she wrote in December 1943, ‘I shall probably end it as a pacifist’.

This is a diary that testifies to the diversity and tensions of wartime experience, as recorded by a sensitive and perceptive observer. 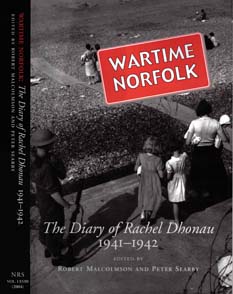