The letters in this collection were written in the 1720s by the south Norfolk landowner John Buxton to his son Robert, the eldest of eight surviving children. They cover the years when Robert was away at school in Norfolk and Suffolk, and then during his university education at Cambridge. The letters reveal the father’s hopes for his son, as he pursued a course appropriate for an heir expected to head the family and run its estate. Buxton’s love of books and particularly his passion for architecture are revealed, as he chronicles first his alterations to the family seat, Channonz Hall, and then the planning and building of Shadwell Lodge, a winter retreat that was later to become the family’s main residence.

Though the reports to Robert, the letters illuminate the life of this Norfolk landed family and its connections. They demonstrate the love felt by John Buxton for his children and his delight in reporting their activities, and also the pervading fear of sickness in the time of high mortality. The letters are complemented by short journals kept by John and Robert Buxton, some ten years apart, recording their journeys through England and visits to country houses.

The letters from an educated sensitive man reveal a picture of rural land ownership far from that of the stereotypical crude, ill-mannered, sporting squire and are an important addition to our knowledge of early-eighteenth-century society. 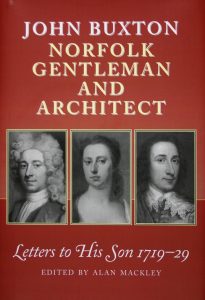