Three aspects if Norfolk’s 16th and 17th Century history are documented here. Wymondham is shown piecing together a corporate identity after the loss of its abbey and its many religious guilds at the Reformation and coping with problems that included the maintenance of its poor and a devastating fire in 1615.

The Norwich Carpenters’ Company ordinances attempt to perpetuate a system that had its roots in the Middle Ages and was coming under competition from non-guild craftsman including those from the City’s immigration communities.

John Aldrich’s farming practices in the 1660s anticipate the agricultural changes of the next century especially in the large-scale cultivation of turnips in a mainly enclosed landscape. 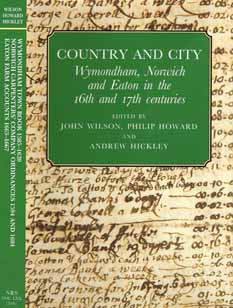