Nathaniel Bacon of Stiffkey (1546-1622) was active as a local magistrate, as a deputy lieutenant and as a member of parliament.

His papers, which provide a lively picture of life in north Norfolk in the late 16th and early 17th centuries, have long been recognised as a major source not only for the pre-occupations of a leading member of the Norfolk gentry, but also for the interplay between local and national affairs.

This volume is the fifth in a complete edition of Bacon’s archived at Stiffkey Hall. 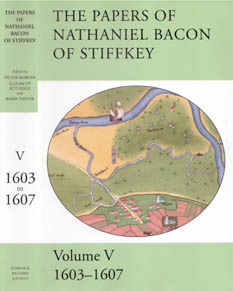