Robert Paston (1631-1683), first earl of Yarmouth, was the most distinguished descendant of the Paston family, celebrated letter-writers of the fifteenth century. He became Lord Lieutenant of Norfolk in 1676, and he and his strong-minded wife moved in court circles. They arranged a most advantageous match for their eldest son with an illegitimate daughter of Charles II, but had less success with their headstrong eldest daughter who, having been extricated from one entanglement, married a Venetian diplomat, much against her parents’ wishes.

Paston’s correspondence documents the life of a Norfolk magnate in a period of political change when the Norfolk gentry divided for the first time along party lines. It also reveals a most likeable man of scholarly and scientific interests, who devoted years to the search for the philosopher’s stone which he saw as the solution to his mounting financial problems. He had a happy family life: he adored his wife, although she seems to have been disliked by nearly everyone else.

The letters show his struggle against ill-health, depression and obesity to carry out his duties as Lord Lieutenant, knowing that the expense of his office was likely to ruin him. At the peak of his success in 1679 when he was made an earl he had already fallen into what he termed a ‘whirlpool of misadventures’ – a state of headlong and irreversible financial decline, which was to ruin his posterity. Fifty years after his death his family died out and their superb house at Oxnead disappeared like a mirage. 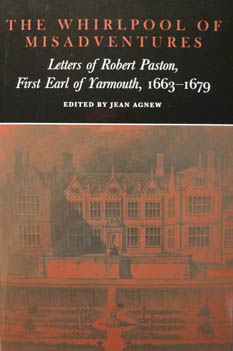