The texts edited in this volume illustrate two aspects of the later 16th -century civic government’s concern to make Norwich a clean and healthy city.

Account rolls of the Great Hospital, Norwich, 1549-50 and 1570-71, The Great Hospital, founded in the 13th century as the hospital for St Giles, was taken over after its dissolution by the civic authorities and became the preeminent charitable establishment in Norwich.

The Norwich River and Street Accounts, 1557-61 and 1570-80, The river and street committee was set up in 1552 to deal with the pollution problems that had dogged the city throughout the medieval period and in the 1570s branched out into the sourcing of paving stone. 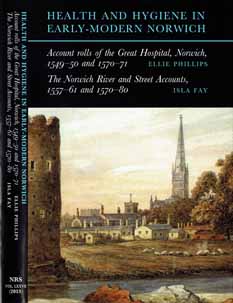