Binham priory was founded soon after 1100 by Peter de Vagognes and his wife Albreda. The Binham cartulary consists of a collection of documents relating to the priory’s possessions from its foundation c. 1104 until the middle of the fourteenth century. As such it is an important source for the early history of the parishes (mainly situated in North Norfolk) in which the priory held property interests. 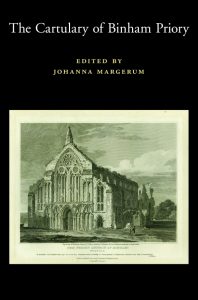