On 24th April 1648 a rioting crowd unwittingly unleashed the largest explosion in seventeenth-century England, detonating ninety-eight barrels of powder in the house rented to Norfolk’s County Committee in Norwich.  The city magistrates’ subsequently investigation ensured that the ‘mutiny’, ‘crack’ or ‘blow’ as contemporaries called it, became the best documented riot of the century.

This volume publishes in full for the first time the 278 informations and examinations taken in the wake of the ‘Great Blow’.  These are among the Norwich City Records collection, itself the largest archive of an early modern English provincial city.  These important testimonies constitute the largest single archival collection for the study of popular royalist insurgency in civil-war England. 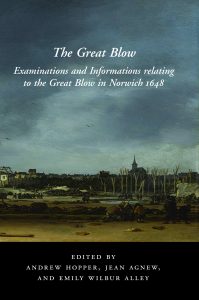 This volume was supported by the Norwich Freemen’s Charity