Alice, the wife of Sir Hamon Le Strange of Hunstanton is fast emerging from the documents as a seventeenth century phenomenon. In her debut, Consumption & Gender in the Early Seventeenth Century Household, she appeared as the consummate housewife and manager of domestic affairs, leading her grateful husband to note ‘her price is above pearls’.

In this volume attention turns to Alice’s role as a farmer, estate manager and guardian of the family finances. In many ways, her performance in this field was even more remarkable. To illustrate the range of her abilities and the scale of her achievement, a selection has been made from her vast archive; this includes her sheep accounts, the early records she kept for her own estate at Sedgeford and her summary of the family finances.

These documents explain why she came to play such an influential role in the management of her husband’s affairs and why her legacy lives on at Hunstanton. 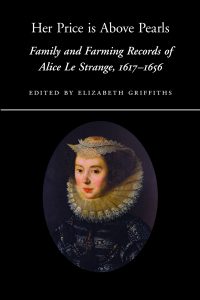